The Nine Lives of Pakistan – Declan Walsh with Neena Gopal 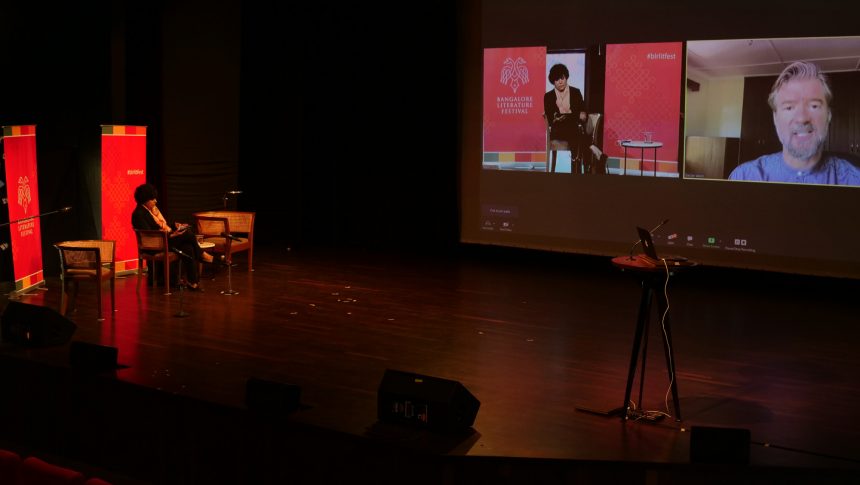 Neena Gopal, a former editor of the Bangalore edition of the Deccan Chronicle, interviews Declan Walsh, a Foreign Correspondent Reporter who was formerly the Pakistan bureau chief for the New York Times. His book, The Nine Lives of Pakistan, is based on the people he had interacted with while reporting from Pakistan.

Neena Gopal begins by asking Declan Walsh about how he felt when he was ordered to leave Pakistan.

“The story started just before the elections in Islamabad” began Walsh, as he explained how he received a letter at midnight, that ordered him to leave the country. His visa was cancelled, and he was given just 12 hours to leave. Later, when he went to London, he attempted to come back to Pakistan. His inability to come back was the starting point of his book. He asked himself how he could narrate the story of what he’d seen- and came upon the inspiration of writing the book.

Neena went on to ask, “Did you feel like you’ve crossed a line?” in reference to his exile from Pakistan

Journalism, Walsh states, has always been restricted in Pakistan. He reflected, in a detailed manner, on his adventures at Balochistan, and what he learnt about the culture of Journalism there. Sensitive topics are often not covered by the local press, and the publication of stories in world-renowned newspapers such as The Guardian, where Walsh previously worked, helped break the stigma surrounding these stories. He had never seen the expulsion coming. “They felt I’d overstayed my welcome.”

Neena proceeds to ask him about one of the chapters she’d found interesting- that of Azma Jahangir.

“Azma was undoubtedly impressive”. Azma Jahangir was one of the leading women in Pakistan, to raise her voice against the discriminations they faced. She led the resistance against the Pakistani restrictions. Walsh goes on to explain how Azma was particularly impressive as she used her privilege as a weapon. People viewed Azma as a traitor of her class and her place as a woman in society. Walsh chose to focus an entire chapter on Azma as he has considered her to be the best example. Azma Jahangir stood for diagnosing a problem when the state doesn’t act as neutral territory.

Neena Gopal, particularly interested in the relationship shared between Benazir Bhutto and Azma Jahangir, asks Walsh what his thoughts were about the same.

“Benazir and Azma had so much in common”, reflects Walsh very enthusiastically. Before Benazir Bhutto passed away, Azma Jahangir had a talk on a public forum, where she spoke about her relationship with Bhutto. Both Bhutto, as well as Azma, have criticised each other publicly and privately too. They shared a strange relationship that was bound by a common belief- a belief about what Pakistan would become. In the broader fight against the Pakistani military, Benazir had prepared to contest Musharraf. Azma, at the same time, was put behind bars by Musharraf. Their mutual relationship almost reached a full circle towards the end of their lives. The death of Bhutto, said Walsh in sombre tone, marked Azma very deeply. She used that moment to talk about the militants and called them “useless duffers”, laughed Walsh.

Neena Gopal brings the attention of the audience to another chapter she found interesting- to the one about Salman Wazir. She asks Walsh a very specific question- “Will the elite ever have a say in Pakistan?”

The debate is really between the ‘Progressive’ Pakistanis and the Extremists. The battle was about bringing a balance between these two approaches, and it was a battle that the likes of Azma Jahangir fought. “Blasphemy is an important problem and has gotten worse”, argues Walsh. He describes the ‘institutionalization’ of blasphemy. In a rather hopeful attempt, Walsh feels that the youth of the Pakistani state have a very important role to play in voicing what the country should be like. Imran Khan, Walsh remembers, had based his election on young people, and has tried to tap into their ‘modern’ identity

Walsh talks about his interaction with Nawab Bakhtiyar. He was very impressed with the way the Nawab presented himself. He remembered how Nawab Bakhtiyar, or “Nawab Bakti”, as Walsh likes to call him, had even quoted Rabindranath Tagore’s prose to him. Walsh situated Baktiyar as a huge figure who had significant connections with the military. Baktiyar had come to Baluchistan due to a gas dispute but went on to become a part of a wider dispute. Walsh had found Baktiyar in exile, at Geneva. Even there, Baktiyar was leading armed groups in Pakistan. As a Foreign Correspondent Journalist, Walsh thinks about the alarming ways and methods in which the Pakistani prosecute their people.

When asked about the ISI and the Taliban. Walsh gave a brief history of the ISI and their growth since the 1980s. He thinks they are very good at manipulating the politics in Pakistan. Their involvement is strategic- and happens by supporting Islamist guerrilla organisations. He, however, finds many faults and criticisms concerning the ISI and points to their various disastrous attacks- “When you point to the failures of this spy agency, you see that at the strategic level, the chickens were coming home to roost at that point.”

Talking of Pakistan’s relationship with India, Declan says he knew a lot of people who came to India for business. With the cricket diplomacy that Musharraf and Manmohan Singh tried to establish, the relationship between Indians and Pakistanis were becoming better. The cultural desires of the people, however, had become hostage to politics. He sees how on both sides of the border, there is a yearning and desire for cultural linkages. He adds, “To respond to your question on my relationship with the country, I think it would be cliché of me to say that it was warm. But what drew me to Pakistan were the people, and how they were open, to be frank about their lives, in terms of what was going on with them. As a reporter, that was incredibly gratifying”

Neena finds it wonderful that, despite being thrown out of the country, Walsh went on to write a book about his journey in Pakistan. The session ends with Neena Gopal congratulating Declan Walsh on his fabulous book, and recommends it to everyone to read.