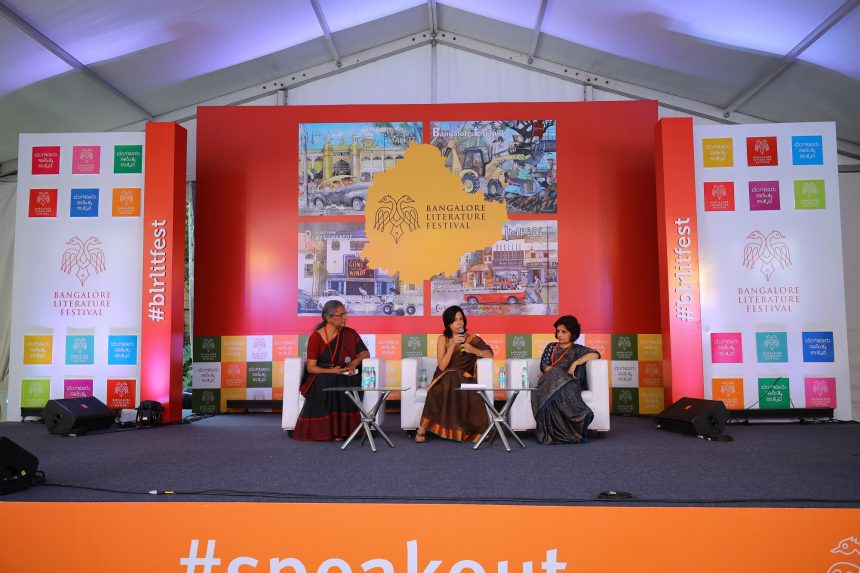 As feminism is finding strong ground today, it is nothing but essential to look into the past and realise the importance of women who were as much a part of mythology as their male counterparts.With this idea, on the bright Sunday morning of Day 2 of Bangalore Literature Festival, Ira Mukhoty and Kavita Kane sat with Reena Puri.

It is interesting to note that Ira emphasises on the heroism of the heroines of Indian mythology in her books whereas Kavita who has also worked much on the subject, prefers to talk about Karna’s wife Uruvi or Urmila or Kaushalya.Leaving her journalist career to devote herself fully to writing she has written books like Karna’s wife, Maneka’s choice and many others.

Being herself involved in Amar Chitra Katha, Reena Puri was curious to know about the importance of woman more than just being a catalyst of the texts.To which Kavita responded that women were not only the catalysts they were also the starting point of the whole era. For instance, before Satyavati, there was nothing and Mandodhari was conscience of Raavan who accepted her husband even when he had his mind on another woman. So each woman’s character is layered, there’s hardly any black and white picture.

Ira reiterated on Draupadi’s character who was a cohesive force binding the Pandavas, first it was Kunti then it was her. So, there was always a woman who kept the Mahabharat going. She also encouraged the listeners to think about Radha, who was a rebel, a married woman but enchanted by Krishna, who was another man. She portrayed that sometimes it was okay to not follow the society but your heart.

The audience was then made to think about the relevance of mythology in these changing times. Giving a positive outlook for the same, Kavita believes that mythology is as much relevant in today’s times as they were in the past because they are stories of everyday lives though represented by gods.So when a man can relate it to his emotions then one can safely assume that mythology is here to stay.Also, sometimes there relevance increases to such extent that one cannot really demarcate between history and mythology.

Giving an alternative world where Vyasa or Valmiki was woman, Reena wondered and asked her panellists about the differences each would see, then. To which Kavita said that because texts like Amar Chitra Katha are inspirational she would not prefer a change and Ira seconded the thought saying that mythology has always preferred the women. These texts have clearly shown that woman always had power but the corresponding interpretations of Brahmins changed the powerful Shakuntala to submissive Sita.